The effect of temperature on neodymium magnets

Remanence: The symbol is Br. The neodymium permanent magnet is magnetized to technical saturation, and the surface field Br retained after the external magnetic field is removed is called residual magnetic induction.

One of many magnetic parameters, its direct industrial significance is that the larger the magnetic energy product, the less magnetic material is needed to produce the same effect. The visual representation on the hysteresis loop is: the line between the intersection of the perpendicular line of Hc and Br and O. The product of Br and Hc corresponding to the intersection on the demagnetization line is the largest, which is called the maximum energy product. 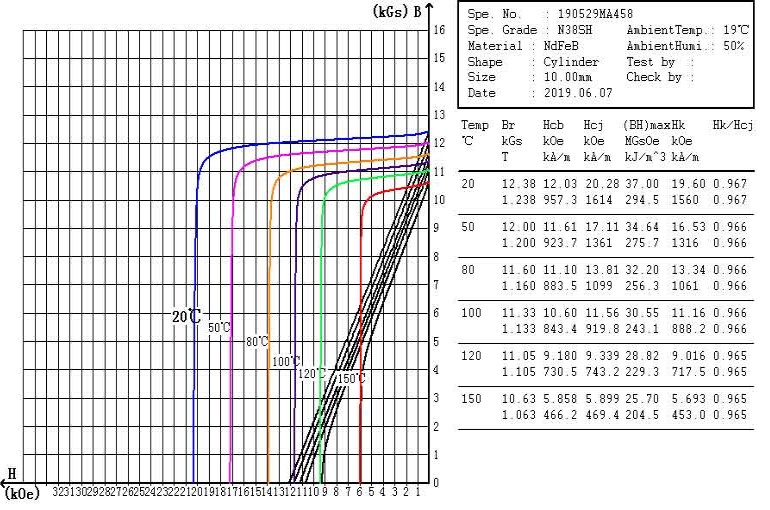 Hard magnetization: Usually Hc>1000A/m is difficult to magnetize, and after removing the external field, it can still retain the material with high residual magnetization.

Paramagnetic material: There are unpaired electrons outside the atomic nucleus, which causes the magnetic effect generated by the electron spin to not be offset. That is, under the action of a magnetic field, the thermal disorder magnetic moment of adjacent atoms or ions in the substance is to a certain extent with the magnetic field strength The phenomenon of oriented arrangement in the same direction.

The influence of different temperatures on the properties of NdFeB

Why different temperatures affect the performance of NdFeB

An important part of the relationship between magnet and temperature is heating the magnet to make its molecules more disordered.

If magnets are heated to the Curie temperature, they lose their ability to be magnetized.

When you cook the magnetic cooling from 100°C back to the boiling point of the room temperature, it will return to its normal magnetic field strength. Cooling the magnet even 0°C ice water or 78°C dry ice will cause the magnet to become stronger. Cooling causes less kinetic energy in the molecular magnet. This means that the molecules in the magnet vibrate less, allowing them to create a magnetic field that is more uniformly concentrated in a given direction. When the temperature rises to the Curie temperature of the material, it changes from hard magnetic to paramagnetic material.

How does temperature affect the performance of NdFeB

The absolute value of the average temperature coefficient of coercivity β (Hcj) gradually decreases with the increase of temperature, and the rate of decrease of coercive force changes from fast to slow.

So, you should know that NdFeB magnets are better stored at low temperatures!