Where do rare earth magnets come from?

Where do rare earth magnets come from?

Do you know how the powerful NdFeB magnet is made? It needs to pulverize the alloy containing the necessary materials into particles, gather these particles to form, and then sinter them. Then cut to the required size to complete. This process always feels like making a cake.

High-performance aero-engines require high technical support, and the requirements for raw materials are also very high. The performance of raw materials directly determines the performance of the engine. The operation process of an aero engine is more complicated. Will produce very high temperature, so engine parts must be high temperature resistant. The difficulty of this technology is also very demanding. The creation of these alloys requires a lot of rare earth metals as raw materials. As a high-temperature resistant rare earth metal, cobalt is an important raw material for the production of heat-resistant alloys, hard alloys, anti-corrosion alloys, magnetic alloys and various cobalt salts.

The rare earth market is diversified. It is not just a product, but 15 rare earth elements, yttrium, scandium, and various compounds, ranging from the purity of 46% chloride to a single rare earth oxide and rare earth metal with a purity of 99.9999%. Has a variety of uses. Together with related compounds and mixtures, there are countless products. First, starting from the initial mining of ore, we introduce the separation methods and smelting process of rare earth one by one. 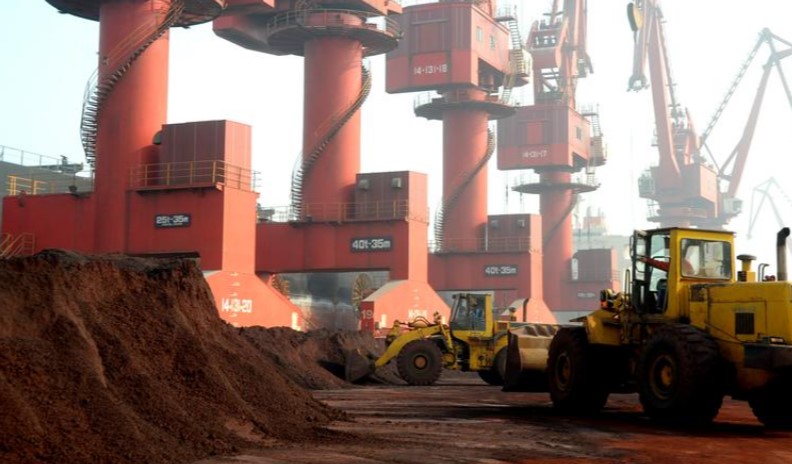 Rare earth in concentrates generally exists in the form of carbonates, fluorides, phosphates, oxides, or silicates that are difficult to dissolve in water. The rare earth must be converted into compounds soluble in water or inorganic acids through various chemical changes. After dissolving, separating, purifying, concentrating or burning, etc., various mixed rare earth compounds such as mixed rare earth chlorides are made, as products or separated For a single rare earth raw material, such a process is called rare earth concentrate decomposition or pretreatment. 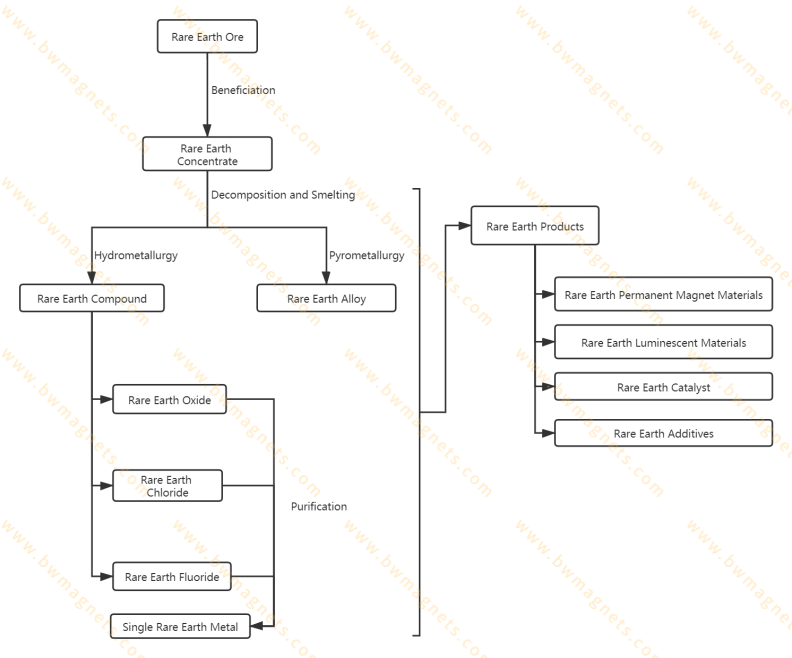 There are two rare earth smelting methods, hydrometallurgy, and pyrometallurgy.

In the chemical metallurgy of rare earth hydrometallurgy, most of the whole process is in solution and solvent. For example, the decomposition of rare earth concentrates, the separation and extraction of rare earth oxides, rare earth compounds, and single rare earth metals use precipitation, crystallization, redox, Chemical separation processes such as solvent extraction and ion exchange. The most common application is the organic solvent extraction method, which is a general process for industrial separation of high-purity single rare earth elements. The hydrometallurgical process is complex, the product purity is high, and the application of this method to produce finished products is broad.

Rare earth carbonate and rare earth chloride are the two main primary products in the rare earth industry. Generally speaking, there are currently two main processes for producing these two products. One process is a concentrated sulfuric acid roasting process, and the other is called the caustic soda process, referred to as the alkaline process.

In addition to various rare earth minerals, a considerable part of the rare earth elements in nature coexist with apatite and phosphorite minerals. The world's total reserves of phosphate rock are about 100 billion tons, and the average rare earth content is 0.5‰. It is estimated that the total amount of rare earth associated with phosphate rock in the world is 50 million tons. Given the low rare earth content in the mine and its special occurrence state, a variety of recycling processes have been studied at home and abroad, which can be divided into wet methods and thermal methods: in wet methods, depending on the decomposition acid, it can be divided into the nitric acid method, Hydrochloric acid method, sulfuric acid method. There are many kinds of rare earth recovery from the phosphorus chemical process, all of which are closely related to the processing method of phosphate rock. In the thermal production process, the rare earth recovery rate can reach 60%.

The method of separating and purifying compounds based on the difference in solubility in solvents is called a stepwise method. From yttrium (Y) to lutetium (Lu), the single separation of all naturally occurring rare earth elements, including the radium discovered by the Curies, are all separated by this method. The operation procedure of this method is relatively complicated. The single separation of all rare earth elements has taken more than 100 years, and the separation and repeated operations have reached 20,000 times. For chemists, the work intensity is relatively high and the process is relatively complicated. Therefore, single rare earth cannot be produced in large quantities with this method.

The method of using organic solvents to extract and separate the extract from the immiscible aqueous solution is called organic solvent liquid-liquid extraction, or solvent extraction for short. It is a method of transferring substances from a liquid phase to Another liquid phase mass transfer process. Solvent extraction has been applied earlier in petrochemical, organic chemistry, medicinal chemistry, and analytical chemistry. However, in the past 40 years, due to the development of atomic energy science and technology and the need for the production of ultra-pure substances and rare elements, solvent extraction has made great progress in the nuclear fuel industry, rare metallurgy, and other industries. China has reached a very high level in the research of extraction theory, the synthesis and application of new extractants, and the extraction process of rare earth element separation. Compared with separation methods such as fractional precipitation, fractional crystallization, and ion exchange, the solvent extraction method has a series of advantages such as good separation effect, large production capacity, convenient rapid continuous production, and easy realization of automatic control. Therefore, It gradually becomes the main method of separation rare earth.

Chloride electrolysis is the most common method to produce metals, especially the mixed rare earth metal process is simple, low cost, low investment, but the biggest disadvantage is the release of chlorine, which pollutes the environment. Oxide electrolysis does not emit harmful gases, but the cost is slightly higher. Generally, single rare earth such as neodymium and praseodymium with higher production prices are electrolyzed with oxides.

The electrolysis method can only prepare general industrial grade rare earth metals. To prepare rare earth metals with low impurities and high purity, they are generally prepared by vacuum thermal reduction. This method can produce all single rare earth metals, but samarium, europium, ytterbium, and thulium cannot use this method. The redox potential of samarium, europium, ytterbium, thulium, and calcium only partially reduces rare earth fluoride. Generally, these metals are prepared by using the principle of the high vapor pressure of these metals and the low vapor pressure of lanthanum metal. These four kinds of rare earth oxides and lanthanum metal fragments are mixed and compacted and then reduced in a vacuum furnace. Lively, samarium, europium, ytterbium, and thulium are reduced to metals by lanthanum and collected on the condensation, which is easy to separate from the slag.