What is a Ring Magnet?

The ring magnets are disc magnets with a hollow centre and the distribution of poles is determined by the direction of magnetisation. Ring magnets are highly practical and replace the need for traditional ring magnets to be glued in place (e.g. on motor rotors, solving the disadvantages of being made to be unmanageable and increasing the maximum torque) to great advantage. 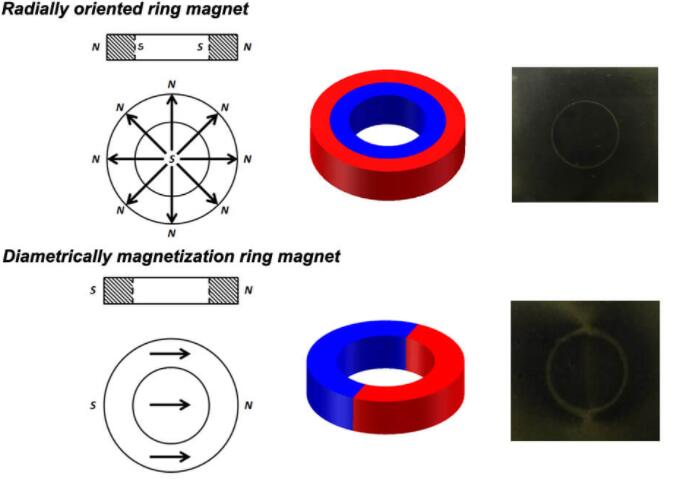 The Applications of Ring Magnet

The Ring Magnet For Electrical Machinery

The performance of ring sintered NdFeB magnets is superior to bonded NdFeB magnets and injection moulded ferrite rings. Toroidal magnets are commonly used in electric motors, where bonded NdFeB magnets and injection moulded ferrite rings are used. These magnets have the advantage of being low cost and easy to assemble. The general speed is around 5000 rpm and the magnets do not need to be protected on the outside. In contrast, ring sintered NdFeB magnets require special moulds for production and magnetisation, which is more costly. In addition, the various magnetisation methods can produce a better sinusoidal magnetic field and are more reliable than conventional ones for high-speed motor applications.

How to Distinguish the Polarity of Ring Magnet?

1.The easiest way to identify the magnetic poles is to put the ring magnet into fine iron filings, and the two positions that attract the most iron filings are the poles. In addition, you can use a block of iron to draw the magnet up from above, allowing the magnet to sag naturally, with the poles at the point of contact with the iron and relative to each other.